Some of our BIGGEST ATTRACTIONS are UNDERWATER

There are only a few places on EARTH you can swim with WHALE SHARKS, the WORLD’S LARGEST fish.

Ningaloo Reef is one of them. Recognised on the World Heritage List, the world’s largest fringing reef is home to stunning coral formations and spectacular sea life, just metres from the shore. Swimming with the whale sharks, the gentle giants of the ocean, is one of life’s most exhilarating experiences and just one highlight of a Western Australia adventure for your clients.

Ningaloo is home to the world’s largest fringing reef and can be reached by just a short swim from the shore. Nowhere else on the planet can you access a large coral reef so easily. What’s more, it’s made the UNESCO World Heritage list for its incredible biodiversity and the ‘bucket list’ as one of the few places in the world where you can swim with the largest fish in the ocean, the gentle whale shark.

For your Ningaloo escape, head for Coral Bay or Exmouth. Flights from Perth get you to nearby Learmonth airport in two hours. Alternatively, you can make the two-day drive from Perth, or extend your stay and customise your own epic road trip adventure.

Reaching nearly 20 kilometres seaward and covering 5,000 square kilometres of ocean, Ningaloo Reef brings you face-to-fin with some 500 species of fish, graceful manta rays and turtles, as you glide over 300 varieties of coral. Or, if you’d prefer to stay dry, glass-bottom boat tours offer a window to this underwater wonderland.

For real adventure-lovers, nothing compares
to the exhilaration of swimming with the world’s largest fish – the whale shark – which visits Ningaloo between late March and mid-July and can grow up to 16 metres long.

Between June and November, Ningaloo welcomes another mammoth visitor, as humpback whales make their annual migration.

Whale watching tours operate from Coral Bay and Exmouth, but if you miss the boat, you might catch the turtle nesting and hatching season when tours run from late January to February. 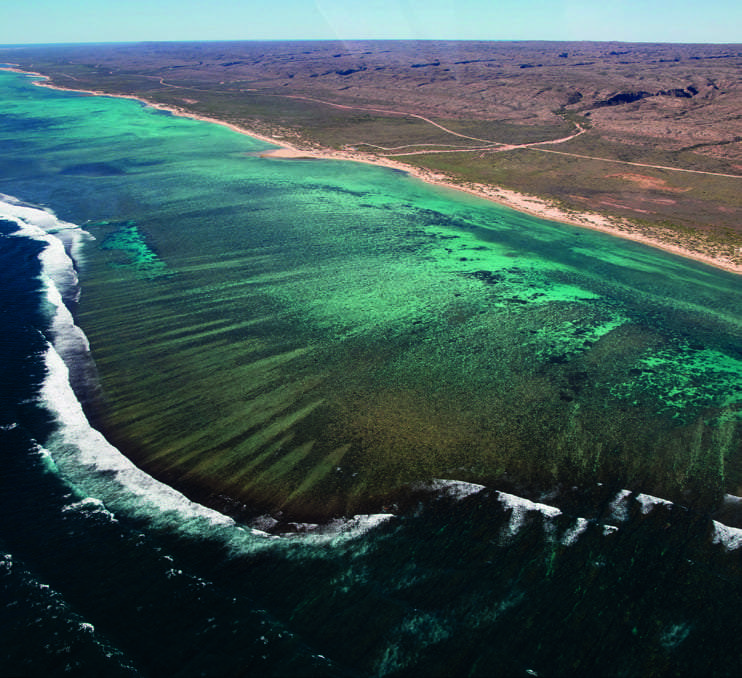 For a different perspective, explore the rugged red canyons of Cape Range National Park in a four-wheel-drive or on foot. Take a guided walk up Mandu Mandu gorge, stopping to spot native wildlife, and be sure to stop at Vlaming Head Lighthouse on the way back to take in a Ningaloo sunset.

To add to the adventure, go camping or ‘glamping’ in Cape Range National Park. Alternatively, make Coral Bay or Exmouth your base – both offer options to cater for all budgets, from backpackers, caravan parks and chalets to motels, lodges and resorts. 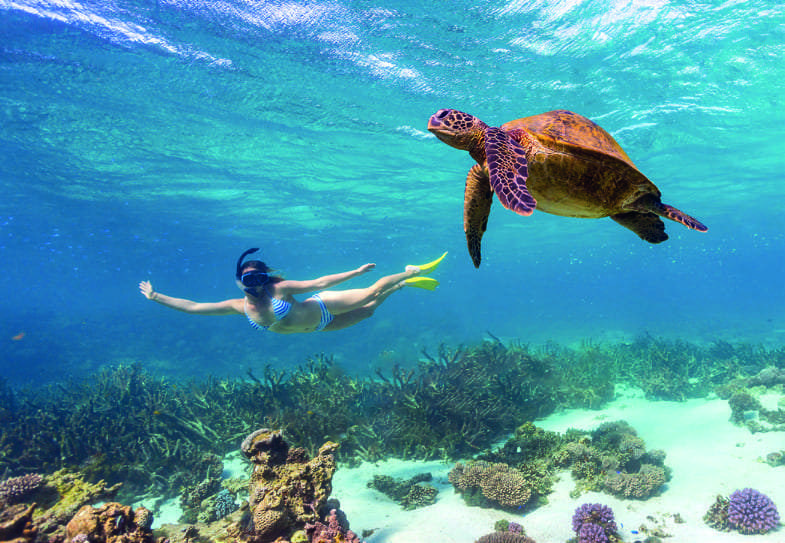 From March to July Ningaloo Reef plays host to the world’s largest aggregation of the world’s biggest fish; the majestic whale shark tours to swim with whale sharks are available out of both Exmouth and Coral Bay, as well as many other eco-adventure tours to view a huge variety of marine wildlife including sea turtles, humpback whales, orcas (killer whales) dugong, manta rays, reef sharks and much more!

Ningaloo Reef can be accessed just footsteps from the beach – something very few coral reefs offer. Enjoy the clearest turquoise water imaginable in the Ningaloo Reef Lagoon and pristine coral gardens at the do-it-yourself snorkelling sites of Exmouth’s Cape Range National Park or Coral Bay where you will swim with hundreds of colourful tropical reef fish species.

Top Things To Do

Swim with the sharks

With its skin spangled with a Milky Way of dots and squiggles, the whale shark captivates swimmers from mid-March to late July. Ningaloo Reef is one of the few places on Earth where you can swim with the gentle giants, who visit the region each year to feed on plankton and krill. Many say it is the experience of a lifetime, a unique interaction that will live with you forever. 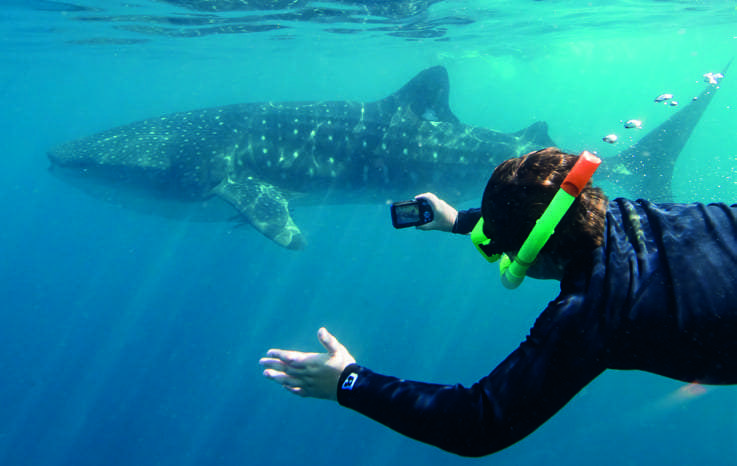 Swimming with a whale sharks 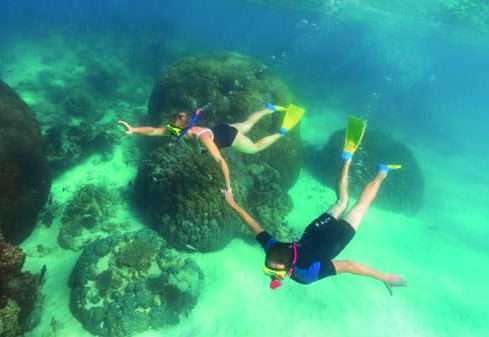 Turquoise Bay is a must-visit spot: its breezy current allows you to simply float and enjoy the passing parade of sea life. Wade into thick coral gardens swarming with sea life, just metres from the shore. The underwater wonderland of darting sea turtles, somersaulting manta rays, more than 500 tropical fish species and at least 200 varieties of coral.  Snorkel as many times as you want – no ticket or ferry trip required.

Capture the gentle breezes of the ocean and immerse yourself in the unique marine environment of Ningaloo aboard one of the small group cruising yachts available for day and overnight cruises which depart from both Coral Bay and Exmouth. 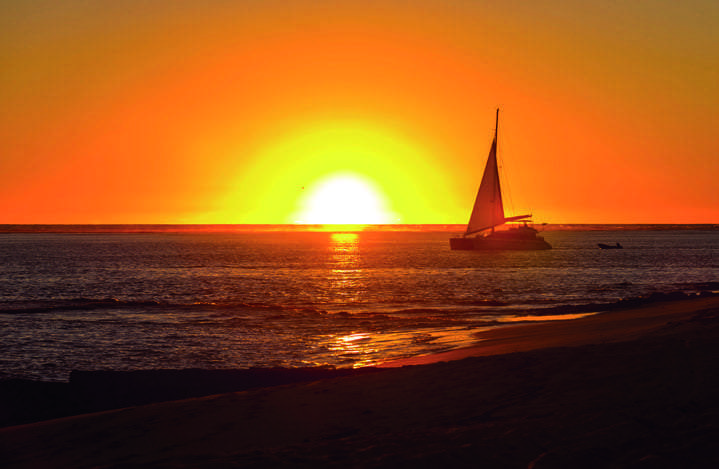 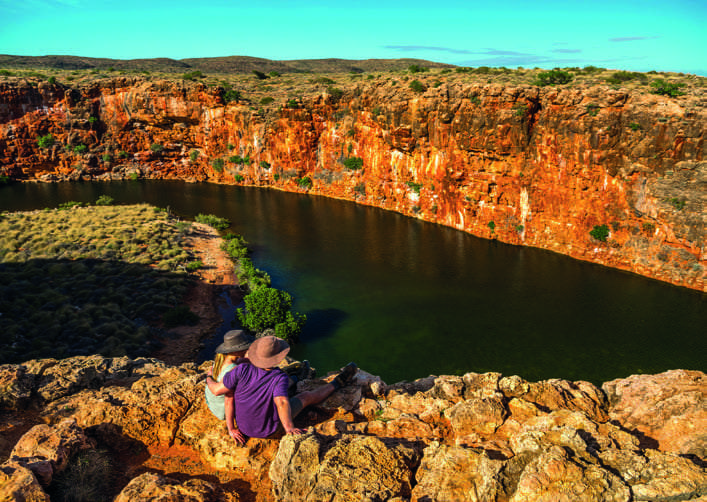 For avid scuba divers, Exmouth’s Navy Pier is regarded as one of the globe’s best shore dives, rife with schooling barracuda, distinctive clownfish and colourful nudibranchs. 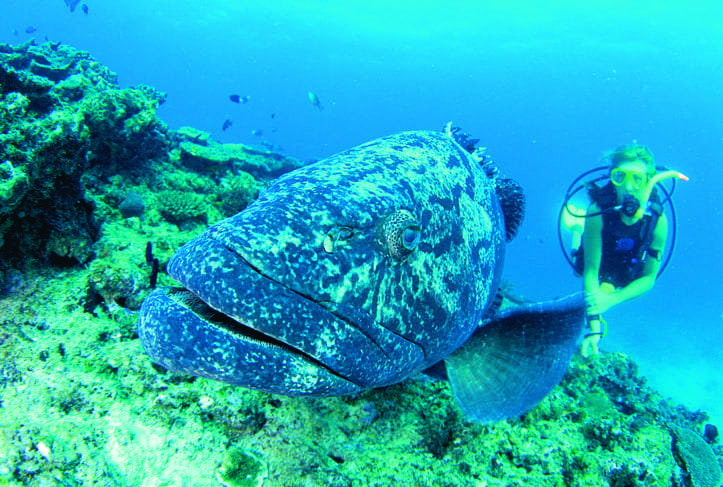 As a sub-tropical environment, the most popular time to visit is April to October with warm sunny days and cool pleasant evenings.
Mid-March to late July: Snorkel alongside the gentle whale sharks. March to April: Witness the coral spawning of Ningaloo Reef.
June to November: Spy humpback whales frequenting Ningaloo’s turquoise waters. November to March: Join a night tour to witness endangered sea turtles nesting in the sand dunes.

Two hour daily flights are available from Perth with Qantas Airlines to Exmouth (Learmonth) with connecting services to east coast Australia available.
Taking a road trip from Perth will take roughly two days, however we recommend allowing 9-11 days so you can explore a number of coastal gems along the way.

How to get around

For self-drive visitors, Exmouth is a depot for all major rental cars and one-way
fly and drive rental packages are now available with Avis. Motorhomes are also available to hire from Exmouth.