The event: One Day International between West Indies and England. 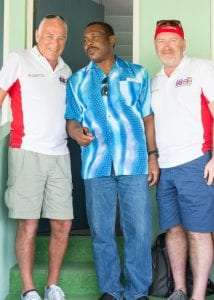 My wife and I were picked by bus from our hotel and transported through the bustling busy streets of Bridgetown to the stadium. We were ushered to our box in a hospitality suite. The ground was buzzing with anticipation, noisy, colourful, exciting. As I remember England bowled, fast, aggressive, intimidating. A youthful West Indies team struggled to impose themselves and wickets began to fall. The English fans and the Barmy Army were enjoying watching their team begin to dominate. After two hours or so my wife turned to me, ‘how much longer to go? ‘Oh! Maybe 4 to 5 hours. ‘Alright then, when does the bar open’. ‘About now’ she disappeared into the food area and right enough I could hear the clinking of bottles. Saved! Lunch was taken and we all trooped in expectantly. We were not disappointed the day was beginning to take off.

I have been a cricket enthusiast since I was boy. Coached by a member of the Fruichy village cricket team. Some might remember they famously won the Cricketer  Village Cup Championship at Lords many years ago. So I have credentials and went onto open the batting for Kirkcaldy’s 2nd eleven. I was a solid grafter, not shoddy but strong on the leg side.

I have always loved cricket as a sport, it has everything, thrills, spills and moments of grandeur. Great feats of courage and skill abound. There are too many legends of the sport to name here but there is one who, for me, stands head and shoulders above all but the very best. Gordon Greenidge. Opening batsmen have always been my heroes, role models, the bravest of the brave. Don’t forget, I was one of the select few! I took the blows, ducked the bouncers, stared down the fastest bowlers and hooked them to the boundary at every opportunity. Those were my dreams anyway. 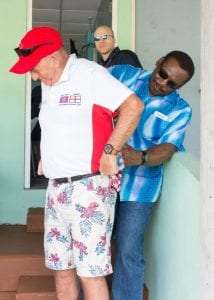 And some dreams come true. We were through lunch, heading for tea, I nudged my wife awake and asked if she would like some and was dispatched to the interior in search of goodies. We had been told that ex players would be around from time to time and we had already been introduced to Desmond Haynes the previous evening.  But standing in the doorway, watching England bat was the man himself. Gordon Greenidge. Dare I, should I? This moment will never come again, so yes I did and spent the next twenty or more minutes talking to my cricketing hero. He was charming and happy to talk, especially to a fellow opener. We understood each other from the get go. He was quietly spoken. Not a big man but still fit, exuding strength with a direct engaging look. He was modest, thoughtful and very aware of the importance and achievements of the great West Indies teams he was a key member of. One particular moment stands out. I asked him if there was one particular bowler he feared. There was the slightest pause before he replied, ‘None of them’. That was all and I believed him.

So there we are a wonderful moment and thank you International Cricket Tours for making it happen.